To answer the most commonly asked question regarding our trip: No, we didn’t become mormon. Lol.

Welcome back to my little corner of the internet! Today I bring you honeymoon recap part II!

For those of you that may not know, my husband and I got married in Nashville, TN on Saturday, October 12, 2019. I am anxiously awaiting my wedding photos and so to distract myself from getting toooo impatient as I wait, I wanted to write up a couple posts to document our honeymoon – something I don’t have any shortage of photos to share on!

If you missed days 1-3 feel free to check out the post documenting all we did here.

We started out honeymoon day four with another slow morning at the A-Frame. Once we finally got up and around, Curtis and I made breakfast and then started the process to get all of our things packed up and back into the car because we had to check out by 11am. Once we were all packed up and ready to go we began our trek to southern Utah!

Can I just take a moment to freak out on y’all for a second because THIS DRIVE WAS UNREAL. Another one of those stop every 100 ft to get out and take photos kinda deals.

Our first stop was at Deer Creek State Park. I took the below photo but I still don’t really know how it was a real place and a real thing that I was looking at. We stayed at this little spot for about 10 minutes just soaking it all in. The only thing that would have made it more perfect would have been if we didn’t have the road right behind us because the few intermittent moments where it was just silent, were absolutely striking.

The rest of our drive was just as gorgeous – just a different kind of landscape than what we got in Northern Utah, many more mesas and red rock structures and a little less snowy-mountainous scenery. This drive was definitely a favorite part of our whole trip for me. Curtis and I spent most of the time just riding next to one another, totally silent, watching the world go by and trying to be as present as we could to enjoy everything we were witnessing around us.

Eventually we made it to Moab! Our destination for the next couple of days. We started out our time in Moab by driving directly to Arches National Park. We ended up getting there just before their tourist center was just about ready to close for the night…so we actually got to roam the park for free. This was an unexpected blessing, as the park is typically $30/car!

It was a GORGEOUS day in Moab, probably about 75 degrees and sunny, but with a nice breeze. We parked on one of the first arch locations that we wanted to visit and took a little hike up and around to get to the arch – of course we took the non-traditional hike up to the arch because of the adventure boy I just married. The only trouble with taking the road less traveled? Snakes. Thankfully we didn’t actually see any but we surely saw where they had been…which made for a very jumpy hike for me hahah.

Eventually, though, we made it to the arch! It was just as beautiful as these pictures would suggest (and then some!) I’ve really never seen anything like them. Part of that is the fact that I grew up in the Midwest and haven’t really ventured anywhere with neat outdoor (natural) structures like this ever.

We spent a good chunk of time just sitting up on this little ledge Curtis is standing on, just enjoying the view from both sides of the arch. You can’t see it in this photo but to the left behind where Curtis is standing is a little wall of rock that extends back in a little “U” shape, there was a guy that was there at the same time that we were that just casually climbed, quite recklessly I might add, his way across (there was a 100+ ft drop if he missed a step), it made the relaxing moment we were having a little less so haha. 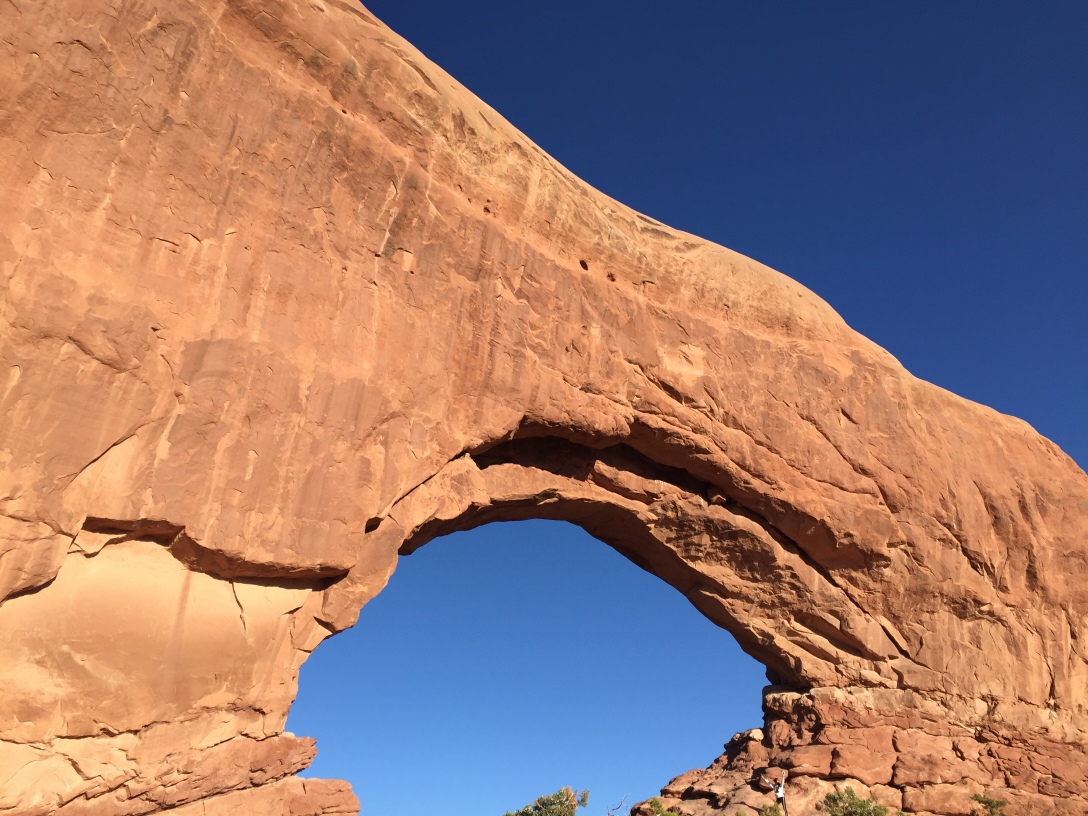 This particular arch was pretty populated so after we snapped a few photos and spent 15 minutes or so enjoying the views, we packed up and headed back to the car – I should mention, we took the man-made walkway back 😉 (no more snakes plz!)

We didn’t really end up checking out any other arches in the park, only because we got there at such a weird time in the day that by the time we finished our climb to this first one, we were both starving so we just headed out.

From here, we drove into the downtown area in Moab and checked into our cutie Bed & Breakfast,  The Sunflower Inn. It’s maybe a 10 minute drive from the Arches and completely surrounded by GORGEOUS rock structures. If you go during other times of the year, they have a fully operating garden (that they use all the fresh produce in to make the guests’ breakfasts!) and beautiful flower gardens as well. I hope we get to go back some day to see them! But, even so, how cute is this place?!

That third picture is the arbor that we had right outside of our little guest house, appropriately named The Arbor Room. After checking in, the man who runs the Inn gave us a quick little tour of the grounds (our place of residence was perfectly located right next to the hot tub and pool!) and then gave a full list of great local places for us to try out for dinner.

We decided to check out Moab Brewery. I got a Mediterranean pasta dish that was AMAZING and an Angry Orchard. I’ll be honest, I didn’t have majorly high hopes since it was just a bar/restaurant in the middle of a touristy little town but I was pleasantly surprised. I can’t remember what Curtis got to eat but he tried a local beer that he really enjoyed as well.

We then just went back to our Bed and Breakfast and called it a night. A full day of arch adventuring in the books!

The following morning we woke up and walked to the little building right next to where our guest house was, this is where they were serving breakfast for the guests! They had made us an egg hash with homemade bread and jam and a bowl of fruit. It was delicious! I want to also mention, they SO took care of me! They had asked me when I made the reservation what my food allergies were, had written them all down and were prepared to make me food. How intentional and kind is that?

After breakfast, we checked out of our sweet bed and breakfast and  ventured back out into the elements! We had planned to go to Canyonlands National Park but ended up at Dead Horse State Park instead….which is basically the exact same views and terrain, just a different park. I actually am so happy we decided to go to this park instead – it was beautiful!! 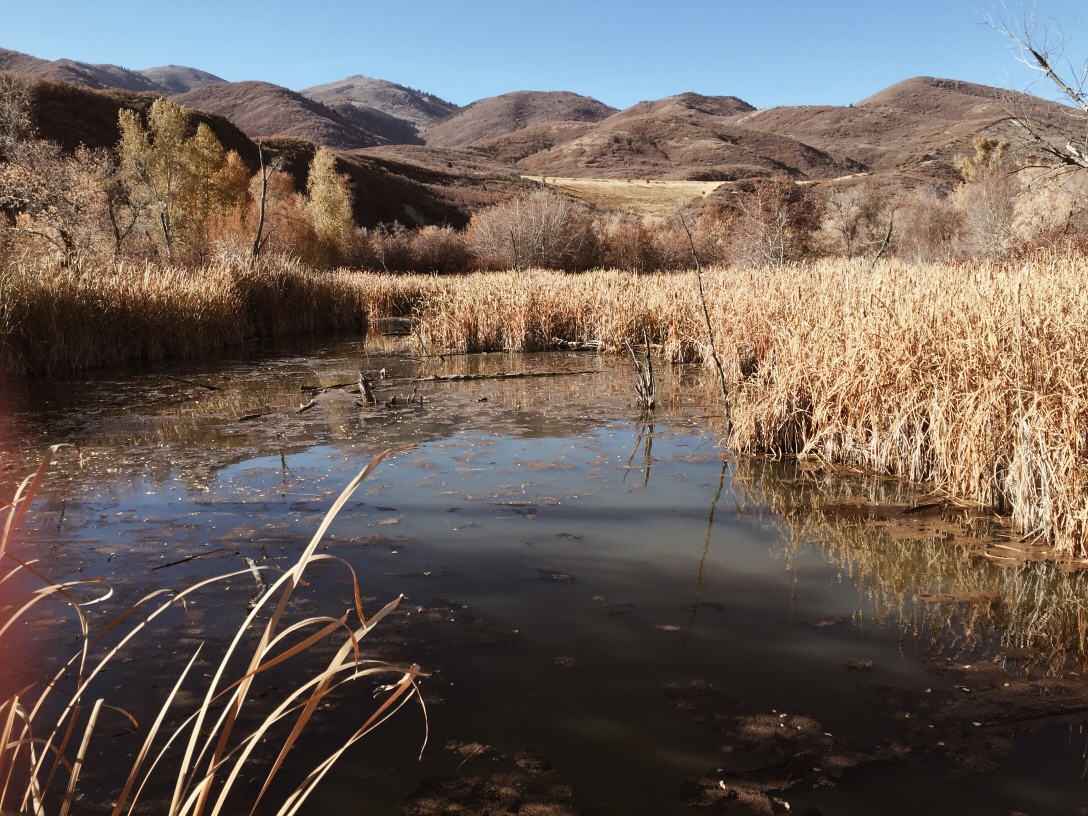 We spent a few hours driving/hiking around this park. I got a little overheated so I spent some time in the car, while Curtis did a little extra exploring. Once we were all adventured out, we ate a quick snacky (aka popcorn and chips lol) car picnic and then we started our drive back up north, this time with a new destination: Salt Lake City.

The drive up to SLC was nice! Beautiful, as always, but as we got back into the city-proper, we unfortunately hit alllllll of the rush hour traffic. By the time we FINALLY made it, it was well after 8pm and we were exhausted. What should have taken us about 3.5 hours, ended up taking about 5.5.

After checking in, we ventured out to grab a bite to eat since we hadn’t had dinner yet – we checked out a little pizza restaurant just down the road from where we were staying called Pie Hole – they had a vegan, Mediterranean-style pizza and it was SO good. I’ve never before dipped my pizza in hummus but after that experience I think I might need to start….I was pleasantly surprised. If you live in Nashville, it reminded us a lot of Two Boots. It looks like it’d be a little bit of a dive but soooo worth it.

We then headed back to our Bed and Breakfast (more info on them in the next post!), took a bath, and then called it a night.

Okay friends, there you have it. The most adventurous (& most beautiful in my opinion) days on our western adventure! Check back in a couple days to read how we spent the final few days of our trip in SLC!